Everything we’ve learned from studying many languages — most recently, Farsi and Swahili — from both successes and mistakes.

“If I had five minutes to chop down a tree, I’d spend the first two and a half minutes sharpening the axe.”

– Unattributed, not actually George Washington so don’t tell me it is

At this point, I speak 9 languages and Jo speaks 5. By “speak” I mean we can talk for about an hour in various social situations without having to revert to English or another language. You can see us speaking Arabic here or Swahili here, for example.

In our early days of language learning, we took a lot longer to get to the same conversational point. Now, we’ve learned a lot about learning and want to share our tips on language-learning with you — plus lessons we’ve learned from the mistakes we made.

Here’s everything we’ve learned about learning new languages in a nutshell.

Get in the Right Mindset

Probably the most important part of learning is believing we CAN learn.

We’re only dedicating this small part to it because this is repeated in so many places. But we’ve realised we’ll get nowhere without a strong belief that we can and will progress. We need to be in the right mindset to learn.

The frustrating thing is that it’s so easy to hit a roadblock. One awkward interaction can set our confidence back a LOT.

Probably the best thing we can do: encourage each other and others. It’s not where we get to that counts — it’s that we’re trying

Choose One Language or Dialect and Be Persistent

For example, if learning Arabic, choose a format, like Modern Standard Arabic or Egyptian Arabic, and stick with it.

Note this includes two commitments: pick one language, and stick with it.

Pick one language or dialect

We’re always tempted to chop and change languages. We want to learn two (or more) languages at once.

The second reason we want to to learn two languages at once is that our minds are looking for easy ways to solve the problem. “Can’t remember a word in Italian? Well, it’s this in Spanish. Happy now?” The mind is trying to give you an answer to a problem… which will solve an immediate question (how to say a word) but not the question we actually have (how to say it in the language in question).

The final reason is that it’s easy to get excited. Some friend is learning Russian and we think that’s cool. We recall our mother tongues are Korean and Persian and want to work on those. But it is usually not in our best interests to do this. Languages are hard — there’s usually enough to focus on in just one.

Unfortunately, and we say this from experience, knowing 1/4 of four languages is equivalent to knowing zero of any languages.

Related to the above, it’s easy to give up whenever you get to one of those times when things get hard. Learning languages always means passing a few event horizons of difficulty. The first hundred words are fine. Then you get to

We have to know in advance we’re going to hit those challenges, and learn to persevere through them.

Set Realistic Targets (and Be Flexible)

It’s critical to set a realistic target. “Fluency” or “conversational fluency” is too vague. Using the European standards for language fluency is better, but they’re not for everyone.

Especially as we’re setting time limits on how much we learn, we have to set super-realistic goals for how fluent we can get in one to two months, and be happy with hitting that limit.

We’ve set our target as being “fluent enough to keep learning in that language”. This means, being able to ask what a word means in a language and understand the reply.

Note all the things that this target is NOT:

Any of the above goals might be yours, so just know what you want to do.

You have to also be flexible with your targets. Want to get fluent in three months? That’s great, but it might end up taking a year. Don’t beat yourself up about it. In three months you’re still way ahead of where you were in the past.

Learn faster with a tutor

One thing we’ve learned over the years is that a great tutor or coach can be life-changing. We’re huge fans of italki for all the reasons in this article.

In our earlier years, we thought we could teach ourselves anything. This is true to a degree, but in my twenties I had infinite time, whereas in my thirties I know my time is about to expire with the onslaught of children (and eventually, death!). It was when I learned Chinese with a few great teachers (and one in particular) in China that I learned the value of a teacher: three hours of study a day with one teacher would progress me as much as several days of independent study. Think about how much your time is worth, and invest in your own education.

And here’s what we think makes a great tutor

This is a huge topic and one we’ll explore in more detail. But tell us if you’ve had a great tutor. What made them great?

Get the Right Tools

It takes time and experimentation to understand the right tools. We’ve wasted a lot of time trying apps, notebooks, textbooks, CDs (what’s a CD? Well it’s a thing that replaced a cassette, which is actually where I started), lists, flashcards (physical and app-based), various dictionaries… and yes, experimentation is part of the process.

We have a very old-school approach to learning that works for us. We like to use

Much more detail here on tools we like to use.

Start with a conversation

We always start with an easy tool, but then when we have our first conversation… that’s when things REALLY start. It always goes like this:

“Hi! I’m Dana.” [Oh cripes how do I say all the many other things I need to say right now, like “Nice to meet you”]

At that point, we always realise how much you need to learn. Then we have a second conversation and learn even more. There’s no limit to how many of these we can stack up. So if we have a teacher, we can have the same conversation over and over until we nail it and all the variations. Why not?

The thing is, this conversation stops being scary. I believe we only get more and more used to the feeling of being scared but also conditioned to understand the benefits.

Learn the pronunciation and sounds

I really like the way French people express that they don’t know something. It can only be described as:

Seriously, like a small farting sound through pursed lips. It sounds so silly if you say it in ANY OTHER LANGUAGE. But say it in French and it’s super French. Try it!

Sounds are an easy thing to drill, but also enjoyable. Make the sounds! Most languages have unique sounds.

In the past, we’ve suffered from not just drilling difficult-to-pronounce sounds (and words in them).

Some common ones you’ll encounter:

The list goes on. There are some that I find it very hard to master (and it bugs me).

One hack we’ve learned is to just pretend we can make the sound… even mimicking the accent in English helps. I like to find a muse, someone who I enjoy listening to, and then copy them. In my head, I’ll be them, mimicking their accent and intonation. After a while, it becomes natural.

Learn the alphabet and how to read basic words

We did an exhaustive review of the most popular writing systems here. But in general here’s why we’ve learned you should learn to read and write:

Can’t emphasise the last one enough. It’s so cool to see another script coming out of your hand.

As we learned Arabic, we recorded Arabic process videos (see them on our channel here, including our final 60-day video)

We enjoyed the process of learning sentences and phrases fluently. They let us use those sentences naturally in conversation, or to give speeches and use them without worrying about conjugation.

We decided, as a result, to start learning and recording ten sentences a day, in any language we’re learning. This makes us learn more vocabulary, but it also forces us to get more fluent.

Despite learning a whole bunch of formal structures, we keep finding, again and again, that in day to day life, language is mostly things like

My brother Riaz once put it elegantly, that the phrase “Argh! My pen just rolled off the table and now it’s fallen under my chair” is really complicated to say. How do you exclaim “Argh”, for one thing? But think how easily a native speaker can say phrases like that. That’s where you need to get to.

Sometimes we just have to memorise stuff. And there’s no two ways about it… no real ‘fun’ way to do it. There’s just a practical way, and that’s the best way.

Here are eleven things we need to know in everyday life… I think this is all the things.

You can’t really rely on phrasebooks for these unless they’re very colloquial. Try hard to actually learn the words people use in everyday life. For example, a phrasebook will teach you that in Arabic countries you greet with “ahlan wa sahlan”. Technically correct, but you’re much more likely to hear a colloquial version depending on where you are.

Similarly, for common vehicles, foods you’d order, currency word (think how often you hear ‘dollars’ vs ‘bucks’ informally) you’ll have to dig a bit. These days, Youtube is your friend.

Core hack… you don’t need to learn complicated directions like every textbook teaches you. Most people just wave their hands and say ‘that way’ or ‘go straight’.

Build sentences and phrases with this everyday vocab until it becomes natural.

Learn what’s around you and what you do every day

My friend Ralph, who was German but learned English fluently while living in a tiny village in the south of Germany, once gave me a great tip on learning languages: Talk to yourself and describe things around you.

Eventually, it becomes translating things. There are many trees next to the road. The cup is full of coffee and it’s too hot.

These are super simple phrases and don’t demand much vocabulary, but do demand that you have it on constant recall. 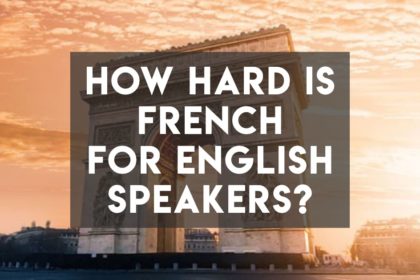 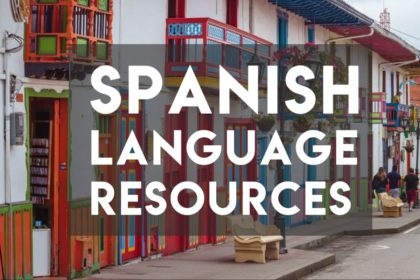 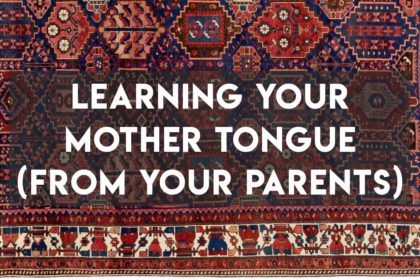 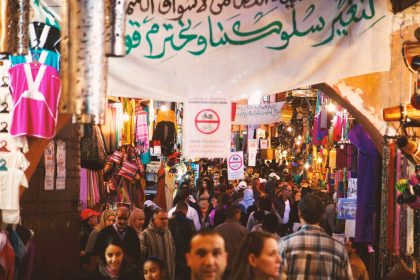 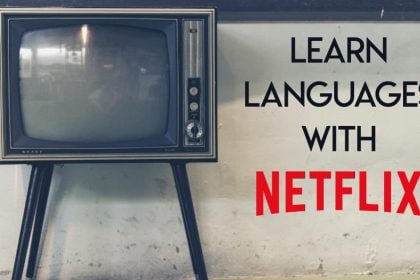 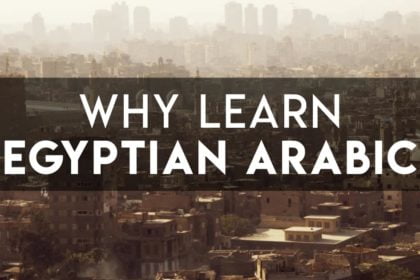 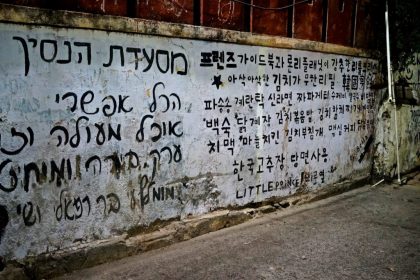 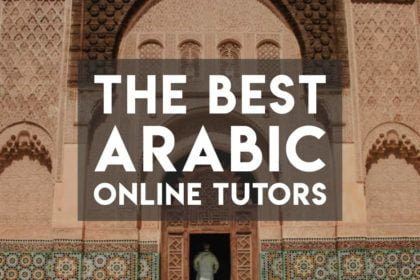